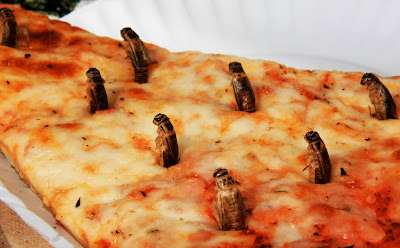 Over the past few years, there has been a growing appetite for edible insects, with a greater number of restaurants serving chili-spiced grasshoppers and cricket-covered pizza. Much of the attention follows the Food and Agriculture Organization’s (FAO) 2013 report highlighting the importance of insect protein in the future of food security and reducing malnutrition. Nicolas Pena Parra even dreamed up the Locust Farm, as a means of providing nutrition to refugee families living in Dadaab, Kenya lacking access to protein-rich plants or livestock.

There are a multitude of environmental benefits supporting entomophagy, or the practice of eating bugs. Bitwater Farms, located in Sacramento, California, champions the protein power found in crickets as an alternative to livestock and fish feed. Sean McDonald and his team developed Bitwater Farms in response to the environmental stresses caused by a rapidly expanding population. Current estimates project that protein production must double by 2050 to satisfy growing needs and adjust to changing tastes and wealth levels. The World Health Organization (WHO) points out that upgrades in refrigeration and cold chain technologies combined with rising urbanization makes safe meat a popular menu item. While this increased demand can be achieved through livestock production, this stands to drive up greenhouse gas (GHG) emissions by 39 percent. Even today, livestock production consumes 30% of crops, 8% of freshwater resources and 18% of GHG emissions. Globally, this adds up to an enormous amount of resources.

Crickets are rich in protein, making them a possible livestock food alternative, as well as being a less water-intensive solution to our own diets, and recently referred to as the “gateway bug” in edible insects. Bitwater compares the amino acid profile of a cricket to that of soy, describing their bugs as being high in omega fatty acids, iron, zinc and other micronutrients. Cricket metabolism relies on ambient energy and they consume considerably less water than other livestock. The main challenge is in producing crickets at a commercially viable level without losing any of these benefits.

A recent study by Michael Lundy detailed the inefficiencies in scaling the operation. In his research, Lundy found that in order to grow crickets to a harvestable size, they needed to be fed processed food waste at an industrial scale. When fed minimally processed municipal food waste, comprised mostly of straw, the crickets did not survive.  Therefore, to be commercially viable, crickets would need to consume the same grain-based diet that they had originally intended to supplant.

Lundy’s study is hopeful that crickets could still increase overall portions of protein delivered through their higher feed conversion. Additionally, he points out that crickets can be raised on organic side streams [wasted food], which we have in abundance (1.3 billion tons per year). His study highlights that in California alone, humans throw out about 2.2 million tons of dry food that crickets could convert to approximately 210,000 tons of dietary protein in the food supply. To put this number in perspective, dietary guidelines encourage women intake 46 grams of protein per day, or about 36 pounds of protein in a year. The conversion of California dry food waste could cover the protein supply of 11 million people for a year. Lundy also suggests the eating black solider flies, which offer similar protein content as crickets, but can sustain off lower quality organic side streams.

Historically speaking, eating bugs is not new. Pliny spoke of the Roman aristocrats feasting on beetle larvae reared on flour and wine. St. John the Baptist is thought to have survived on locusts and honey while living in the desert. In the US, shrimp and lobster are considered delicacies often demanding high market price at upscale restaurants. Although these crustaceans stem from the same arthropod family, in western culture they are perceived as cleaner and safer.

Virginia Emery compares the growth of the commercial insect industry to that of the commercial mushroom sector, which can also garner the negative perception of being unsanitary. These insects are grown in clean rooms with mostly organic feed, which makes sense since bugs are the primary target of pesticide design. While the FDA, CDC and USDA continue to strengthen policies to safely bring bugs to market, it is important note that there is already an acceptable level of bug fragments permitted in your food. These regulating bodies are particularly interested in understanding the potential allergen effects posed by edible insects, especially considering their relation to shellfish. Agencies speculate that the crickets could be safer than their livestock counterparts, which are susceptible to swine flu and other forms of infections that can cause human ailments, but also come with their own unique set of diseases.

Eating forces us to re-evaluate what we are consuming, as it becomes a part of us through the digestion process. If the cricket industry grows, will we find ourselves seeking module-free crickets, similar to the premium paid for cage-free chicken? Will insect-support groups demand fair treatment? The complete cycle of consuming a black soldier fly that lives off our own low quality waste, could potentially lead to more widespread thinking and greater awareness regarding the nature, quantity and rationale of low quality waste produced.